A general in the Union Army during the Civil War, Thomas Cass was born in Queen’s County, Ireland, in 1821.

Cass’s parents immigrated to North America when he was only nine months old and settled in the North End of Boston. After a stint as a courier, Cass joined his father’s business and built a reputation for himself as a savvy businessman; he later bought a trading vessel and became a stockholder in a Boston towboat company. He married Adeline Richardson and had several children, but only three survived childhood.

Boston Governor John Andrews commissioned Cass a colonel at the outbreak of the Civil War and tasked him with forming an Irish regiment. Cass brought together the 9th Massachusetts Volunteers, which came to be known as ‘the Fighting Ninth.’ At a time when ethnic tensions were high in Boston, this group – comprised of Irish-Americans – represented Boston’s acceptance of the Irish population. To reinforce this sentiment, Governor Andrews presented a flag to the regiment and raised an Irish flag beside the other national flags on display on Boston Common.

Cass suffered severe wounds in the Battle of Malvern Hill in 1862. His troops moved him to Boston for surgery, but Cass died the following day. 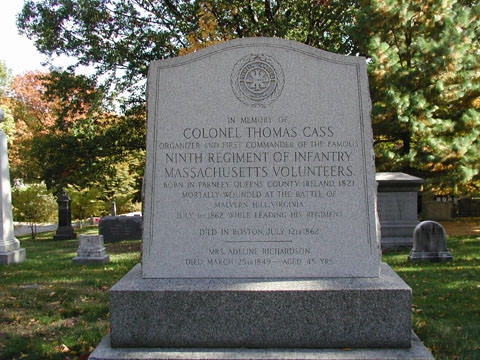